Some of you may know that I’ve been working on a series of novels. As of yet, I haven’t let too many people see it. After a few damning critiques, I was going to put it aside, but after much umming and erring I’ve decided to post it piece by piece on my blog. What do I have to lose? I’ll let you decide if you like it. It’s a dark fantasy and not to everyone’s taste, but I think there are plenty yet who might. If it is poorly received, then I’ll put it in my bottom drawer uncompleted, but if it’s liked well enough, I’ll finish it. I’ll leave it up to you. Please, feel free to comment on my page—good or bad. After reading each bite-size portion, there will be a comment section at the bottom.

What if you had to live your life under the threat of a terrible monster? For one girl that is reality. Follow Lilitha as she tries to escape the Diablon’s clutches before it devours her.

The people of Norfolk have suffered foul weather for the past ten years, their farms are flooded and they’re starving. Their only hope is the Diablon, a legendary monster which can clear the skies by devouring guilty souls. Or so it is believed.
Best friends Lilitha and Clara are two such guilty souls. They’re Defective, both born with features considered evil in the eyes of the Church—Clara is mute and Lilitha is a redhead.
For most of their lives they have concealed themselves successfully—until the day Sir Mandalay, Norfolk’s head knight, finally discovers them.
Their fate is assured. the Diablon will devour them, body and soul. But is the Beast all that it seems?
Lilitha is soon to find out, and when she does, she will uncover a terrible truth that will change her life forever. 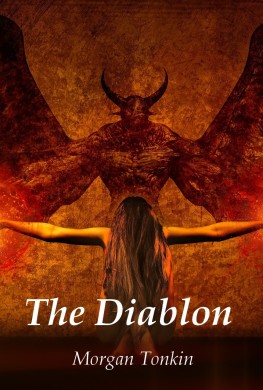